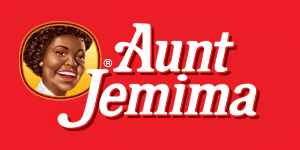 Weekend mornings sometimes mean a more, special breakfast beyond grabbing a bowl of cereal or oatmeal, because there’s more time to prepare it. Growing up, in our house, it often meant pancakes and all the trimmings. Yum! Even now, occasionally, I will get out the skillet and make them. If I don’t make them from scratch, I use Aunt Jemima’s® Pancake Mix because I actually prefer it over other brands; and I can also find it in specialty grocery stores, here in .

Like most people, I rarely think about the origins of a brand, if it pre-dates me; but in researching Aunt Jemima‘s® beginnings, I have found that its roots are quite controversial. I recall when the brand ‘had a makeover’ in the late 1980s, but I don’t think I realized just how far it had evolved from its launch, in the previous century.

Created in 1889, the inspiration for the Aunt Jemima® brand came from a character in a racially-derogatory minstrel show song, written in 1875. The creators of Aunt Jemima® Pancake Mix were not good businessmen, so had to sell the brand and the formula to the R.T. Davis Milling Company in 1890.

That same year, R.T. Davis hired freed slave, Nancy Green, to ‘be’ Aunt Jemima®.  Born in , was made to play Aunt Jemima® as a stereotypical, antebellum plantation ‘mammy’, being subservient, overweight and dressed in typical slave attire, with a red bandana headscarf.  made her debut at the World’s Columbian Exposition, in . She was charming and gregarious, while she flipped flapjacks, sang songs, and told stories. She created so much interest, that police had to bring in crowd control. Nancy became known as the ‘Pancake Queen,’ and her likeness was captured by illustrator, A.B. Frost, to become the new logo.  played Aunt Jemima® until her untimely death in 1923.

In 1926, The Quaker Oats Company purchased the brand, and finally hired Anna Robinson to be the next Aunt Jemima®, to play her as part of the promotion at The Chicago World’s Fair, in 1933. The brand’s first slogan (launched at The World’s Fair) carried the mammy archetype further, being, “I’se in Town, Honey!”


For two, more decades, the stereotype continued, with its advertising; and  ‘live Aunts’ being blues singer, Edith Wilson, actress Ethel Ernestine Harper, Quaker employee, Rosie Hall, and actress, Aylene Lewis, who was the last Aunt, playing her, until the 1960s. 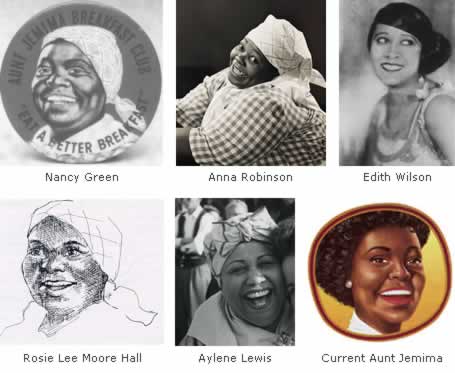 Beginning in the mid-1950s, African-American consumers began criticizing the mammy stereotype being portrayed; and the term, Aunt Jemima® became synonymous with the term, Uncle Tom (a subservient, Black man, derived from the protagonist in the novel, Uncle Tom’s Cabin). But the brand was selling strongly and had expanded into other products, such as syrup; so, Quaker Oats did not see the merit in changing the iconic brand.

In fact, Quaker Oats remained resolute for almost thirty-five more years. As late as 1986, an ‘offended Oprah Winfrey refused to act in a Saturday Night Live sketch depicting Quaker Oats laying off Aunt Jemima®; she proposed a skit about the ensuing argument instead.'

Finally, in 1989, to mark the brand’s 100th birthday, Quaker Oats bowed to consumer pressure and gave Aunt Jemima® her latest makeover. In an attempt to “make her look more like a working mother,” according to a Quaker Oats spokesperson, she was slimmed down, her hair was styled and greyed a bit and her outfit changed to a white blouse and pearl earrings.


Unsurprisingly, when you review Aunt Jemima’s® history on the company website (click here), none of the controversy is mentioned, and none of the old logos or packaging are depicted.

As a branding & marketing communications professional, I don’t see Quaker Oats ever completely abandoning a representation for Aunt Jemima® because the legacy and brand equity are now too strong; but I am very pleased that she is no longer a caricature, which evokes negative emotions - especially amongst the African-American community.  Hopefully, at least in the Western world, gone are the days when any race should be belittled or humiliated to sell a product.

UPDATE ON JUNE 17, 2020: I am pleased to acknowledge that I was wrong. I never thought Quaker Oats would do it. Following a TikTok calling out Aunt Jemima's racist past, by Singer, Kirby, that went viral, with more than 2m+ views, PEPSICO/ QUAKER OATS announced that the brand will be retired. Power to the people! 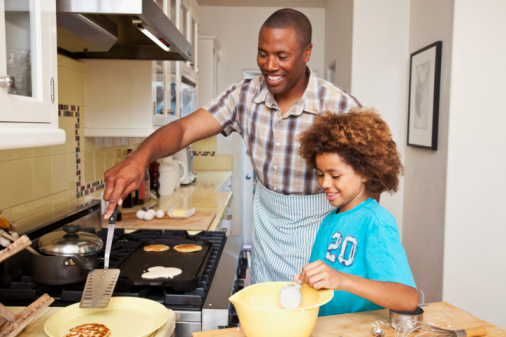 All posts in this blog have been researched and written by Zena Martin. Sources are attributed at the bottom of each, daily blog post. Please feel free to share the blog's link, but reproduction of its contents is forbidden without the express permission of the blog's author, Zena Martin

Zena
I'm an American-British, dual-citizen, living in Coastal Georgia, after 19 yrs abroad; and I am curious about life - past, present and future. ALL BLOGS, WRITTEN BY ME, ARE COPYRIGHTED. Thank you.